Disclaimer: Modifying security credentials could render in loosing access to your server in case of problems. I strongly suggest you test the method described here in your Development environment before using it in Production.


Key-Pairs is the standard method to authenticate SSH access to our EC2 Instances based on AWS AMI Linux. We can easily create new Key-Paris for our team using the ssh-keygen command and manually adding them to the file /home/ec2-user/.ssh/authorized_keys for those with root access.
Format:

But when the number of instances and members grows we need a centralized method of distribution of this file.

- Store an authorized_keys file in S3 encrypted "at-rest".
- Transport this file from S3 to the instance securely.
- Give access to this file only to the right instances.
- Do not store any API Access Keys into the involved script.
- Store all the temporary files in RAM.

- Create a bucket. In this example is "tarro".

- Create in your local an authorized_keys file and upload it to the new bucket.

- Select the file properties with S3 Console and select Server Side Encryption = AES256 and Save. 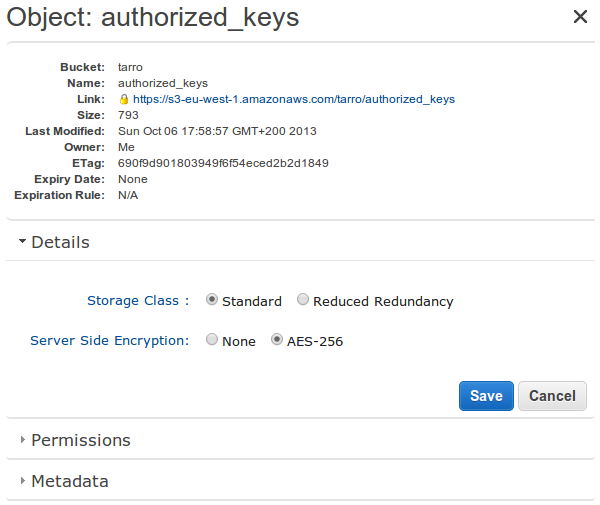 - Calculate the MD5 of the file with md5sum.
Example:

- Create a file called authorized_keys.md5, copy the md5sum result in (only the hexadecimal string of numbers and letters) and upload it to the same S3 bucket.

We will use an EC2 IAM instance role. This way we don't need to store a copy of our API Access Key into the instances who will be accessing the secured files. AWS Command Line Interface (AWS CLI) will automatically access to the EC2 Instance Metadata and retrieve a temporary security credential needed to connect to S3. We will specify a role policy to grant read access to the bucket that contains those files.

We will use Amazon Linux AMI 2013.09 which includes AWS CLI.

- Launch your instance as you usually do but now select the IAM Role and choose the appropriate one. In my example is "demo-role" but you could have different roles for every application tier like: web servers, data bases, test, etc. 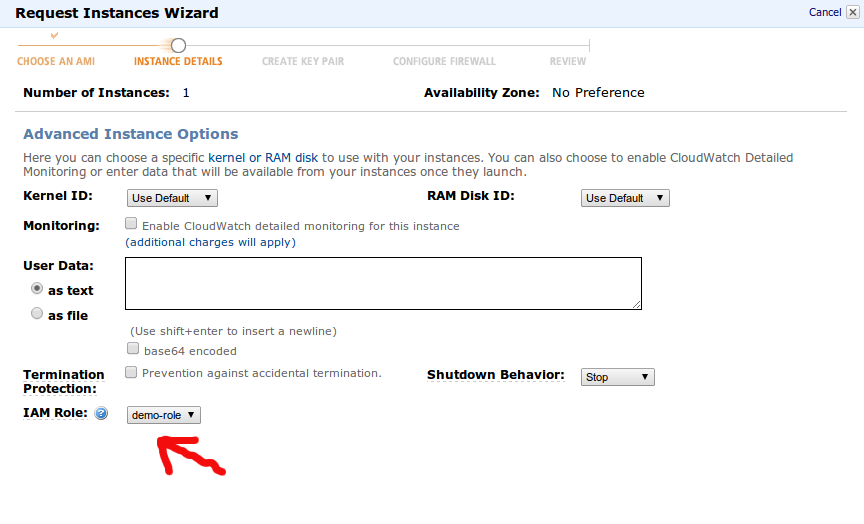 - In /root/bin/ create the file deploy-keys.sh with the following content:


- And give execution permissions to root and remove unnecessary Read/Write permissions.

OR you can do it all at once more easily executing this command:

and test the script. You can check the script results at /var/log/messages

- Trigger after reboot the script by adding the line /root/bin/deploy-keys.sh at the system init script /etc/rc.local