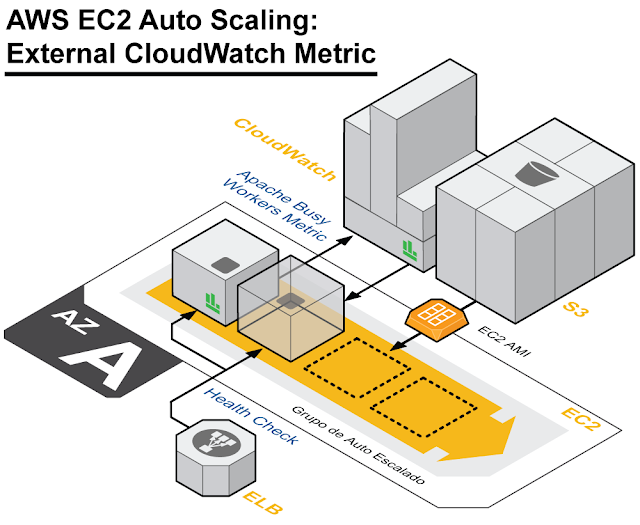 Our Goal: Create an Auto Scaling EC2 Group in a single Availability Zone and use a Custom CloudWatch metric to scale up (and down) our Web Server cluster behind an ELB.

This exercise will include the Basic Auto Scaling scenario discussed early but now we will add a real Auto Scaling capability using a metric generated inside our application (like Apache Busy Workers). You have a post here about creating custom metrics in CloudWatch. You can easily adapt that configuration to any other custom metric.

What we need for this exercise:

- An empty ELB.
- A custom AMI.
- A EC2 Keys Pair to use to access our instances.
- A EC2 Security Group.
- Auto Scaling API (If you need help configuring the access to the Auto Scaling API check this post).
- A Apache HTTP server with mod_status module.
- A Script to collect the mod_status value and store it into CloudWatch.
- A custom Test Web Page called "/ping.html".

Is important to be sure that all the ingredients are working as expected. Auto Scaling could be difficult to debug and nasty situations may occur like: A group of instances starting while you are away or a new instance starting and stoping every 20 seconds with bad billing consequences (AWS will charge you a full hour for any started instance, despite it has been only one minute running).
I strongly suggest to manually test your components before create a Auto Scaling configuration. 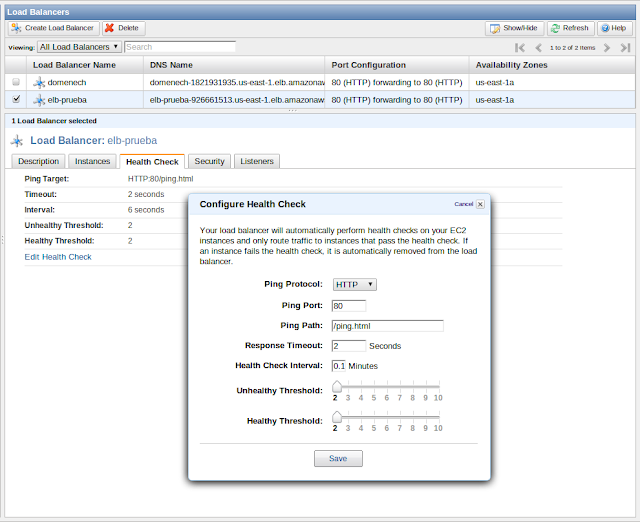 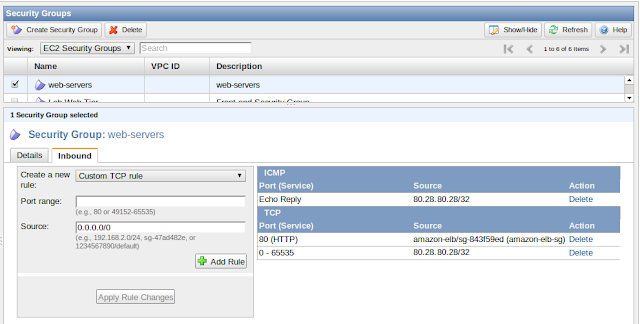 - Deploy a EC2 Instance using the previous created Key Pair and Security Group. Install a Apache HTTP server and be sure it is configured to start automatically. Create a Test Page called /ping.html at the web sever root folder. This text page can print out ant text you like. Its only mission is to be present. A HTTP 200 is OK and anything else is KO.

- In this exercise we will add to our custom Linux AMI a script and a crontab configuration to create a Custom CloudWatch Metric. We will use what we've learned in this previous post.
Once you have the Apache HTTP server installed and mod_status configured following that previous post instructions, copy this new script version:


It is similar to the one used before but now we collect just one metric (instead of two) and we store it under a common CloudWatch Name Space. All instances involved in this Auto Scaling exercise will store its Busy Workers values under the same Name Space and Metric Name. In my example the Name Space will be "AS:grupoprueba" and the Metric Name "httpd-busyworkers".

- Create a crontab configuration to execute this script every 5 minutes.

- Deploy a new instance using the recently created AMI (In my example "ami-0e5ee467") to test the Apache server and the script. Check if the HTTP Server starts automatically.

- Verify that the script executes every 5 minutes (following the previous instructions) and that CloudWatch is storing the new metric. You could either check that using CloudWatch console or using command line:


With as-put-scaling-policy we create a Policy called "scale-up-prueba" for the previous created AS Group. When triggered it will increase the AS in one unit (one instance). No other AS activities for this Group are allowed until 300 seconds passes. After this successful API call a ARN identifier is returned. Save it because we will need it for the Alarm definition.


With mon-put-metric-alarm we create a new CloudWatch alarm called "scale-up-alarm" that will be triggered when the last 10 minutes average of all the values of "httpd-busymetrics" is bigger than 10. Then the scale up policy will be executed through the ARN identifier. In this example, each Apache server with no external load has an average of 5 busyworkers so a good way to test it is to define a threshold of 10 to increase our cluster capacity. In a real world configuration those values will be very different and you have to tune them to mach your application.


Now we've created the Policy to be executed when capacity of the AS Group needs to be reduced. And a new ARN identifier is received.


The same way we did before with the scale up alarm, we create a new one to trigger the down scale process. The configuration is the same but now the threshold is 9 Apache busy workers after 10 o more minutes.

This command give us quick look to the running instances within our AS Groups. This is very useful when dealing with AS to find out the amount of instances running and its state. Now the result is "No instances found" and this is correct. Our current configuration says that zero is the minimum healthy instances our application needs to work.

We can describe the recently created alarms with mon-describe-alarms:


Or using the CloudWatch Console: 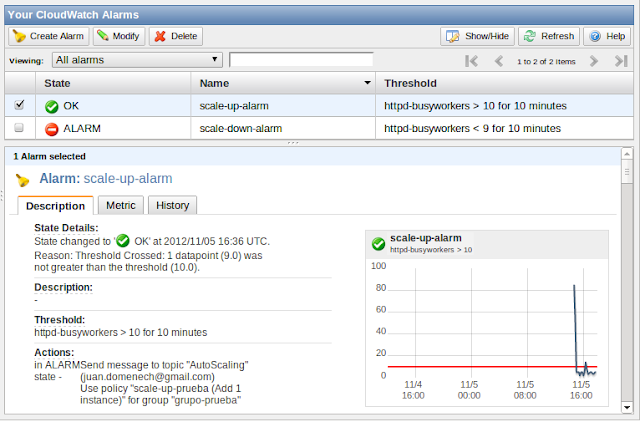 Under normal circumstances, the "scale-down-alarm" will have the state "Alarm" and this is normal.
Using CloudWatch Console you can add to this alarms and action to send an Email notification to obtain better visibility during the test.

Now the cluster is idle, no instances running. So now we will tell to AS that our application requires a minimum of 1 healthy instance to run:

Notice that now Minimum is 1 in the AS configuration and now there is a new instance under our AS Group ("i-9d022be1" in this example). This instance has been automatically deployed by AS to match the desired number of healthy instances for our application. Notice the "Pending" status that means that it is still in the initialization process. We can follow this process with as-describe-auto-scaling-instances:


Now the recently launched instance is in service. That means that its Health Check (ELB ping.html test page) verifies OK. If you open the AWS Console and read the current ELB "Instances Tab", the new instance ID should be there, automatically added to the Load Balancer and your application up and running.

Common problem scenarios:
- If you observe that the new instances are constantly Launched and Terminated by AS this probably means that /ping.html page fails. Stop the experiment with "as-update-auto-scaling-group grupo-prueba --min-size 0" and verify your components.
- If your web server and test page verify OK but the AS is still Deploying and Terminating the instances without a chance to rise to the Healthy status then you should increase the value of "--grace-period" in the AS Group definition to give more time to your AMI to start a initialize its services.
- If the instances start but they fail to automatically be added to the ELB then probably the Instances are deployed in a incorrect Availability Zone. Either correct your AS Launch Configuration or expand the ELB to the rest of AZs in your Region.

Force to Scale UP:

To test the AS Policy we can lie to CloudWatch and tell it that we have much more load than we really have. We will inject a false amount of Busy Workers to the CW Metric:


And after a while, the average Busy Workers value rises and this triggers the scale up Alarm and then its AS Policy:


And a second instance automatically is launched:


If we keep feeding CloudWatch with fake values and we keep the average high, soon a third instance will be launched:


If we leave it alone for a while, the average will decrease and the automatically launched instances will be terminated with a 10 minutes interval:


We have learned something here: An instance in an AS environment is volatile. It could disappear at any time because it is Terminated and with the instance its EBS volumes. You have to take that into account when designing your infrastructure. If your web server needs to store some information that you could need later you should save it elsewhere: Cloudwatch, external log server, data base, etc.

Also notice that the survived instance is the i-99e4cde5. This is the last one that was deployed. And the first one to be terminated during the shrinking process was the first member of the group. Auto Scaling uses that logic to help you to get more value for your money. EC2 bills you the full hour, so leaving alive the last launched instance gives you a chance to use what you've already payed for.

The Policy used in this example is not a perfect method and this Average Metric is a bit confusing. First we have to know that the Average CPU used in the official documentation for Auto Scaling is a native CloudWatch metric. It is automatically created when you define your AS Group. EC2 takes the CPU usage of all Instances in your AS Group and store there the Average value (It does the same with other EC2 metrics: CW Console -> All Metrics pull-down menu -> "EC2: Aggregated by Auto Scaling Group"). An elegant method could be do the same kind of aggregation but with our custom metric, but I don't know how to do that. So, what we have is a single metric name receiving all those different values from our cluster members. Then is important that all those members send that information in a timely fashion to not distort the average calculation. I think that a "crontab */5 * * * *" is a good solution but I'm quite open to other suggestions.

By default the Load Balancer will send an equal amount of connection to the web cluster members and therefore the amount of Apache Busy Workers will remain "balanced" among the cluster. The configuration described here is not useful when using "sticky sessions". If a web server increases its connections above the other cluster members, could trigger an unnecessary scale-up action.


You don't want an AS Group doing things while you sleep so I suggest you to delete all your AS configurations after your test is done.